“Sure, I’d love to come meet him. But, I can’t guarantee that I’m going to take him…” I typed, simultaneously asking my coworker if I could borrow his cat carrier for a couple of days.

Weeks earlier, my friend and her husband had found a cat who’d been abandoned in their building. Thinking at first that maybe he was simply lost, they put up signs… but nobody claimed him. As time went on, it became clear that he’d been mistreated before they found him, as he was very skittish and malnourished. Because they couldn’t keep him, they were left with two options: find a home for him themselves or take him to a shelter and hope for the best.

During this same time period, I was having a really hard time. Earlier that year I’d ended a significant relationship with a live-in partner, only to have my heart broken again after an ill-advised, emotionally abusive rebound with someone else. One of my best friends was living in another continent, while another was in the midst of moving out of the country. I was dissatisfied at work, somehow feeling both stagnant and overwhelmed. I felt… lost.

So when my friend texted me about the cat, I wasn’t sure it was a good idea.. I was struggling to take care of myself. How on earth was I going to take care of anyone else? Yet when she sent a photo, I couldn’t help but smile. He looked just like the cat we’d had growing up. Even though I said that I wasn’t sure, I still brought that borrowed cat carrier with me on the drive to the city, “just in case”. 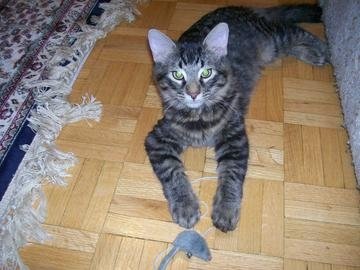 I needn’t have worried about making the decision, because as it turned out, it wasn’t mine to make. Moments after I walked in to their apartment, Maury sauntered up, took a quick look at me, and curled up in my lap for the rest of the evening. He’d decided: I was his human now.

Once we got settled in, I named him Maury. I chose the name partially because my friend and I had loved watching Maury Povich when we lived together, but also as a play on the show’s frequent paternity tests because I actually don’t know who his father is. From there, the named morphed to the punny “Maury Pawvich” (which is also his Instagram  handle).

Although things didn’t turn for me around immediately, having someone else to care for did improve my mood. Plus, it was nice to come home to a cuddle bug who would jump straight up into my arms to give me a hug as soon as I came in the door.

It’s been nine years, almost to the day, and I haven’t regretted Maury’s decision once. I’ve never met a cat so affectionate. As I type this, he’s curled up across my arms, watching the words appear on the screen (yes, you’re correct; having a ten-pound cat across your arms isn’t a comfortable way to work). But more than that, he’s been my supportive little buddy throughout all my challenges over the years, knowing exactly when I need a purring cat to help ease my mind and calm my fears. (Isn’t it crazy how animals always just know?)

Happy cat-iversary, Maury! I think by writing this blog post, I’ve sealed my fate as a cat lady, so you’ve got me all to yourself for the foreseeable (fur-seeable?) future.

(And if the cat lady thing didn’t do it, my puns definitely will.)